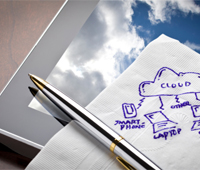 The term “web designer” didn’t exist, or was something almost abstract when I was born (1986). Ten years ago, those that called themselves web designers were in fact real pioneers, this domain being at the very beginning. Five years ago the Internet “totally exploded” and even at the beginning of the millennium the first signs were visible. In 2005 being web designer was pretty common and the specialists said that it’s very hard to keep the rhythm with the Internet growing.

Nowadays, a web designer has an impossible mission, to stay updated with everything related to Internet. Much more, web design evolved both vertically and horizontally. We have a clear progress of HTML and CSS, now we have the fifth, respectively the third version and it seems that the evolution isn’t finished – it is about vertically movement. Beside these two entities, there are many other possibilities of creating websites or barely making them more interactive and appealing.

A few years ago, the cross-browser compatibility was a real headache for web designers but now the context is even more complex: the problem of browsers rendering is still present, but the main issue is how to construct websites that looks OK on various displays using different operating systems. The new technologies, especially the smartphones and the tablets influenced the way of designing websites and a web designer, from now on, must know how to administrate the situation. Also the social media, already an “old “revolution, changed the mentality of crafting online presences.The web design horizontal evolution seems to challenge more the web design community and it’s clear that in this context, being a web designer isn’t an easy task.

Under these circumstances, no wonder that the profile of a web designer changed considerably. Now he is obliged (until now, it was only recommended) to use wisely the power of social media and he must stay updated to the latest technologies.

Let’s deeply describe the profile of the new web designer:

A web designer should wisely use social media; there are advantages that can’t be denied. By using Facebook and Twitter, many designers found a client or were founded and hired. The main idea is that no matter which platform you use, it must be smartly done. Being successful using social media is the subject of many books and it’s impossible to explain it in just few words. Consequently, don’t waste your time and get your hand dirty with social media. Unfortunately, don’t confound social media with small talk with the friends.

Willing or not, the future is mobile.This means that the new web designer must be a tech addicted or barely a fine specialist of the new updates of handheld devices.

The dispute between Apple and Google is very benefic for the users, but it is a nightmare for designers because each operating systems, iOS and Android has various particularities to satisfy. Besides that, the operating systems are very often bringing novelties and updates that sometimes complicate the job of web designers.
Clearly, don’t ignore this domain; it will be sooner or later another part of web design science.

3. The real design will never die

Despite the new technologies arriving are very liked by common people and social media is in perpetual growing, the “old” web design won’t ever die. You can’t realize responsive layouts without grids and a website will be a real disaster with no color theory behind. The aesthetics is appreciated and once again, without good design there is no beautiful layout.

4. So, how will look the future web designer

Surprisingly, the future will look the same. Nowadays, we have designers that know how to do a website from the initial sketch to uploading and it means design, coding, SEO optimization, some marketing, usually via social media and hosting which is wonderful. I congratulate these polyvalent persons but personally I don’t believe that they are able to be real specialists in all these complex fields. Anyway, they exist and their endeavor is really appreciated by web design community.

Due to the complexity of web design, we have from end developers, designers, SEO practitioners and so on. Definitely, there will be designers that will know how to make the websites more smartphones friendly but almost sure, there will appear a new type of specialist, quite probable “responsive developer”.

The future is unpredictable and none may say by sure that a scenario will happen. But no matter the situation, there are clear evidences that the new technologies will have a serious impact over the modality of making websites. The first signs are right here, it’s enough to consult some “old” web design blogs to see how quickly changed the topics and created categories as “responsive design”, “mobile design” or even “smartphones and tablets”.

NOTE: this article is just a personal opinion which may be different or even opposite from yours. All my ideas are based on the daily practice and also on my daily feeds from some quality blogs in addition to small talks with other web designers. If you disagree me, there is no problem but it will be great to have your opinion, therefore feel free to use the comment form.