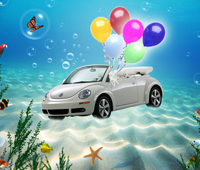 In this tutorial I`ll show you how to create an unreal underwater scene using Photoshop.

This is how the final image looks: 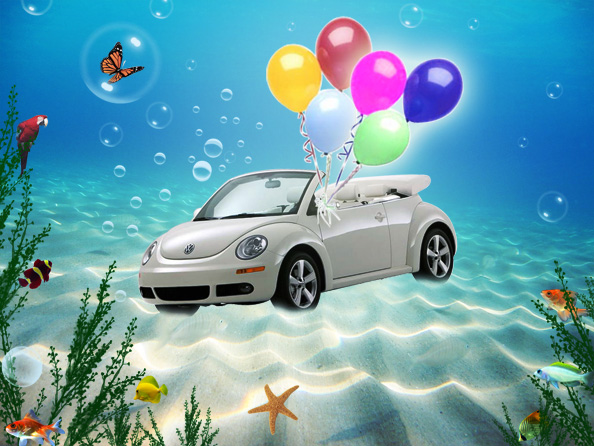 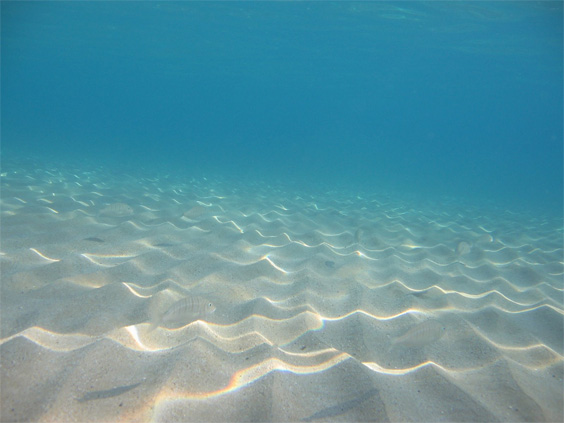 Duplicate the image layer 2 times and set the blending mode for the first duplicated layer to Soft light and for the second to Overlay.

Select the last layer and go to Filter->Blur->Radial blur and apply the next settings: 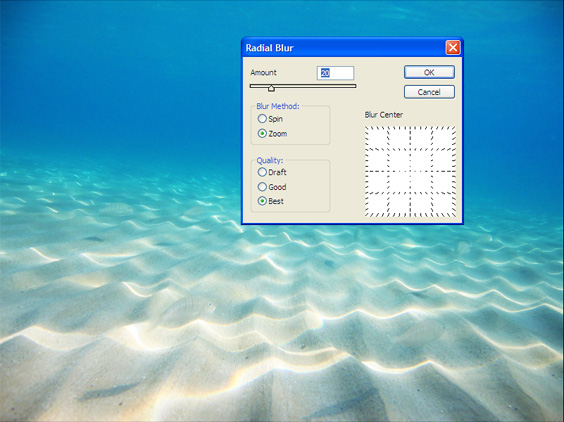 Now we have a nice image more colored and with a motion effect.

Load the image into Photoshop and with the Pen Tool(P) make the selection of the car like in the picture: 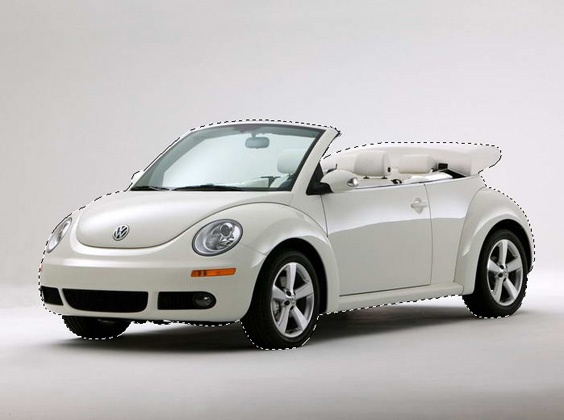 Cut the selection and paste it into the main project.

For the car layer,create a Layer mask(Layer->Layer Mask->Reveal All) and with a soft brush erase a little bit the bottom of the wheels to create a sink in the sand effect. 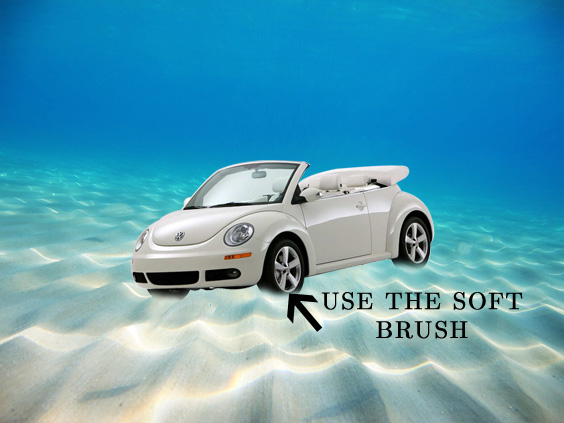 Go to Layer->Layer Style->Blending Options and give the car an Outer glow effect with the settings: 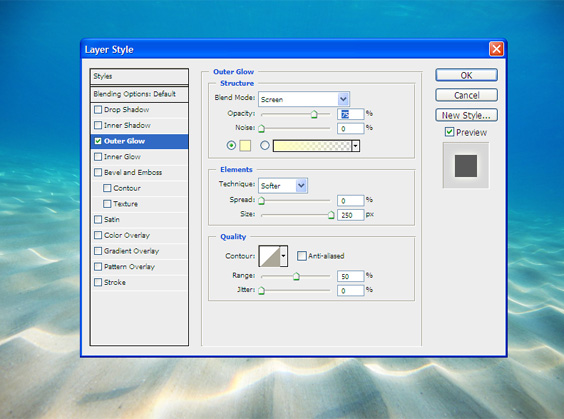 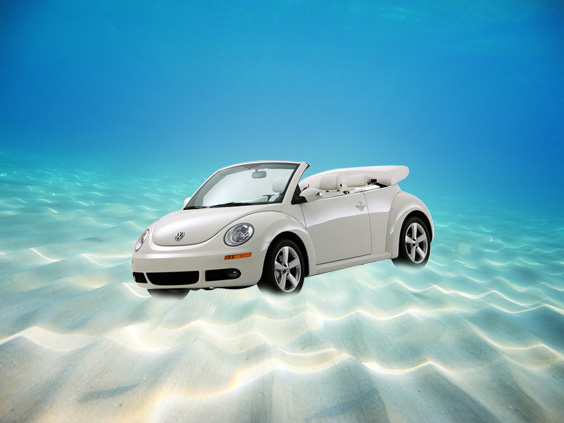 Download the Underwater plants brushes from the top list and start creating vegetation along the image margins. 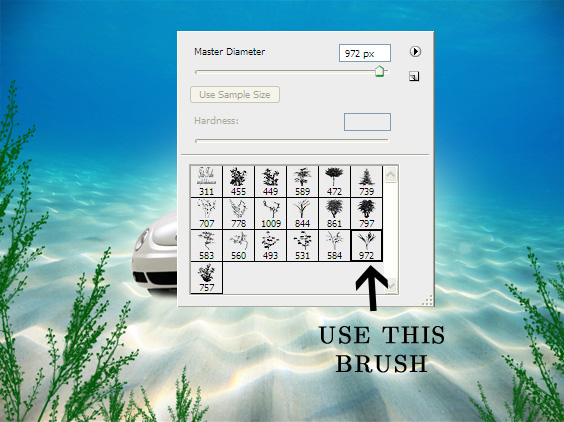 Download the psd fishes and move them into the main image resizing them to have small and real fishes. 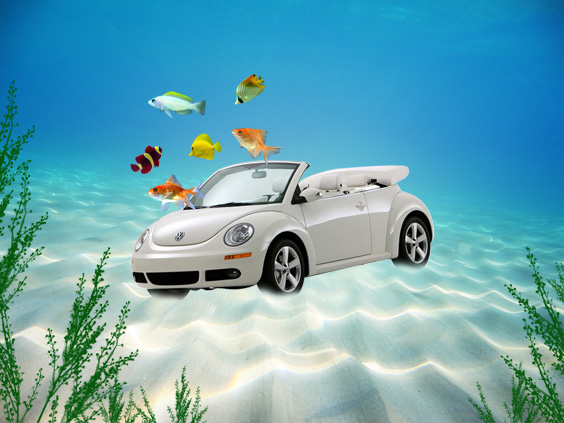 Place the fishes to create the impression that they`re hiding into the plants. 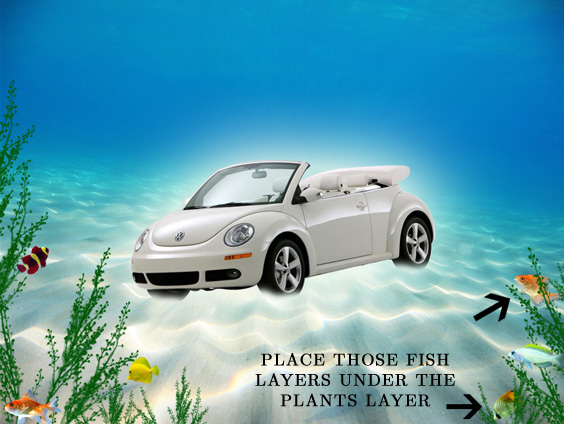 Download the parrot image and using the Pen Tool(P) create the path of the bird. 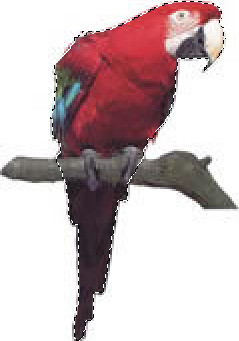 Step 9:Inserting the parrot into the main image

With the selection of the parrot made,cut it and paste it into the main project.

Place the layer under the plants layer and if you didn`t make the parrot path perfect,create a layer mask and delete the white areas around the bird. 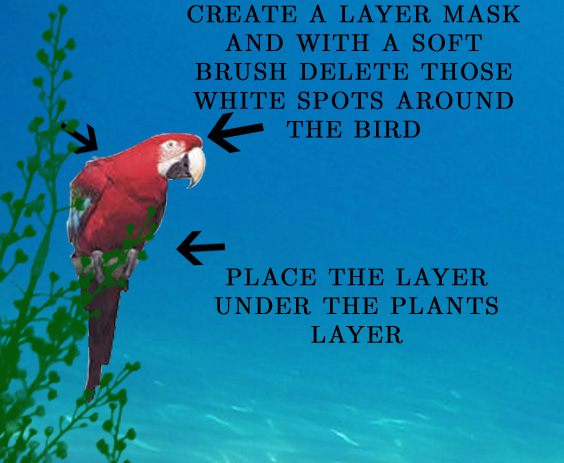 Step 9:Delete the stick on which parrot stays

Using the Clone Stamp tool(S) try to make the stick disappear.Then with the Erase Tool(E) delete the plants from the bird`s claws to create the effect of sitting on the plants. 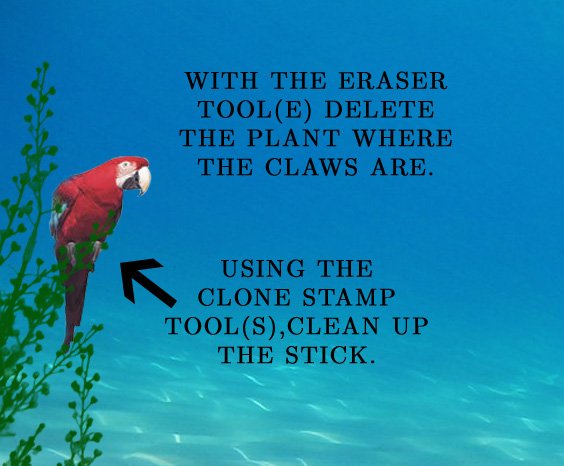 Download the Sea star image and with the Pen Tool(P) Create the path of the image. 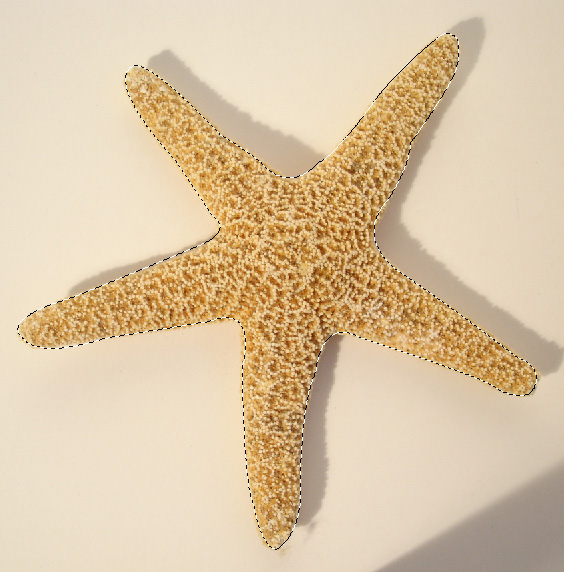 Paste the image into the main project,resize it and go to Edit->Transform->Warp and warp the star to make it as it floats on the water. 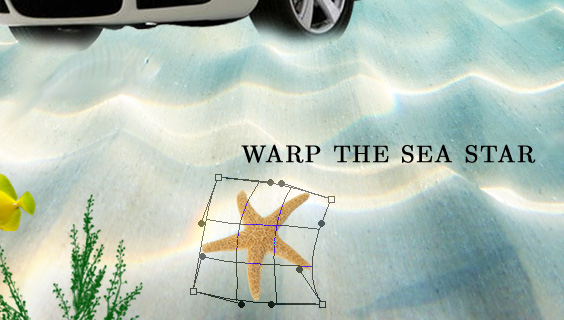 Double click on the sea star layer and apply a glow effect to make it more lighter.The main image looks now almost as an underwater scene. 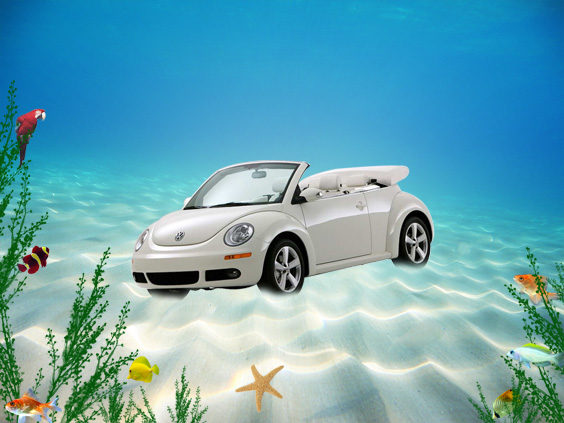 Download the balloons image and with the Pen Tool(P) make a selection around them. 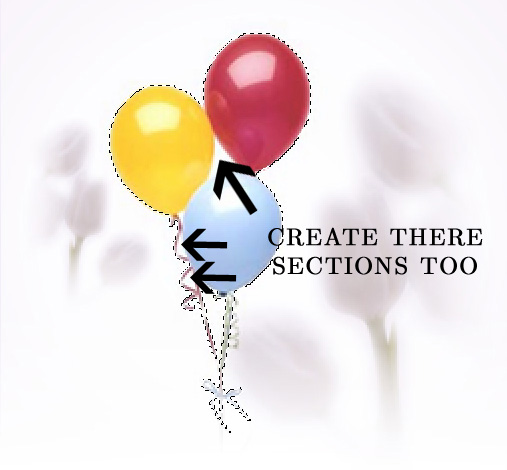 Add them to the main image and place them in the right of the rear mirror.

Duplicate the balloons layer and change the Hue/Saturation to create different colored balloons.Rotate them and place them like in the image: 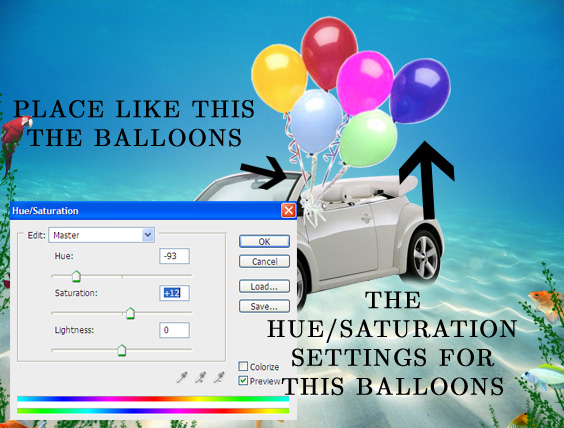 Add an outer glow effect for the balloons to make them shine. 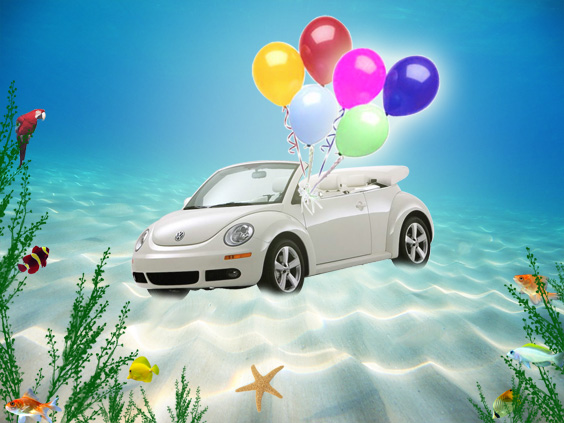 With the bubbles brushes just downloaded from the beginning of the tutorial,create some bubbles of different sizes. 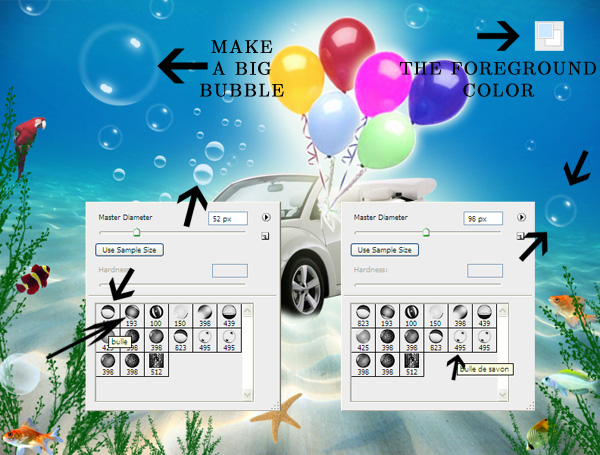 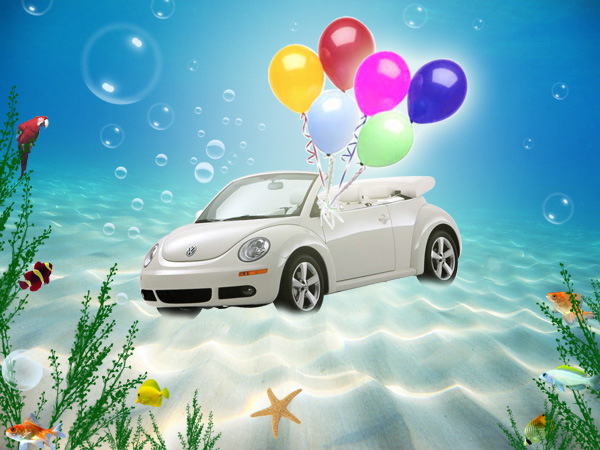 Download the butterfly image,make the selection using the Pen Tool(P) and add it into the big bubble.

Then add an Outer glow and inner glow effect to make it shine. 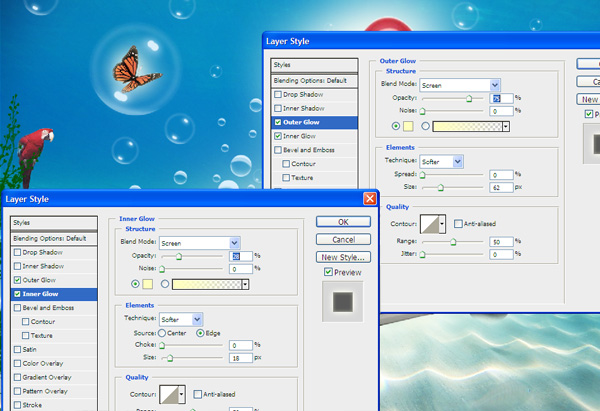 The image looks quite finished but I`ll add a gradient over the entire image to make it more colored.I`ll use a blue gradient to create an underwater effect. 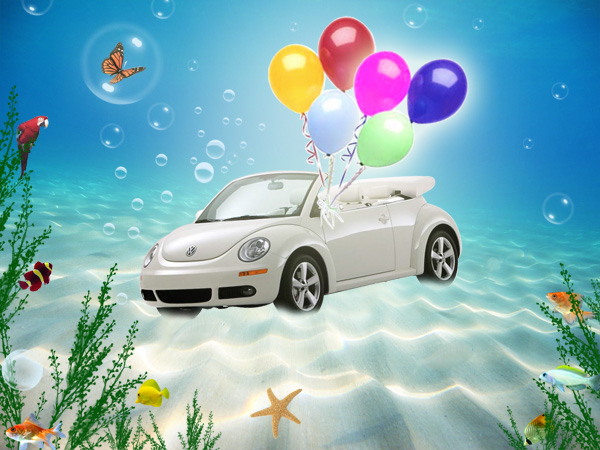 Go to Layer->New Fill layer->Gradient and apply the next settings: 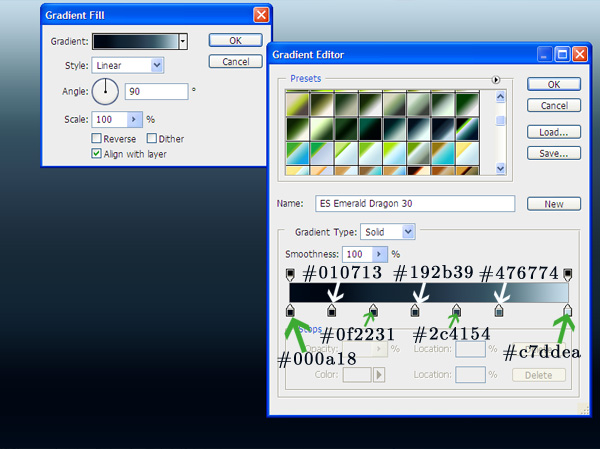 Set the blending mode for the gradient layer to Overlay and Fill it up only with 40-50% of the color.

Hope you learned some new techniques and had fun doing it.Enjoy it and see you next time.

You can view the final image below. 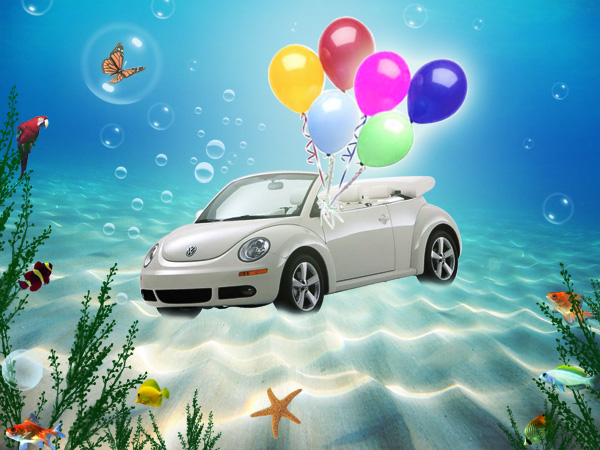