The days when WordPress was just a blogging platform are long gone. Its CMS capabilities transformed it into the most popular solution for building a website. Nowadays, WordPress can serve the most diverse websites: blogs and magazine websites, obviously; websites for restaurants and hotels; video platforms; websites for music bands.

You can even build eCommerce websites using WordPress and this is exactly the niche we`ll be talking about today!

WordPress is well known for its versatility, but let`s be serious: can you actually build an online store with WordPress? I mean, there are already platforms on the market specialized in eCommerce, like Magento or Shopify which do a good job when it comes to selling things online, but can WordPress cover all those selling options and payment gateways? It certainly does!

The engine behind WordPress is the almighty PHP, as some of you already know. When it comes to PHP, sky is the limit!
WordPress eCommerce history is quite short and started in 2011, when people from Sara_P Studio decided to take WordPress to a new level and built one of the most successful eCommerce WordPress themes, MayaShop. At that time, all the theme functionality was mainly built with a lot of custom PHP code, product metaboxes and enthusiasm. It turned out to be a great decision because users just loved the way how the theme works!

The interest in eCommerce WordPress themes was obvious and some people already saw the opportunity of a business around this niche. So, one year later, in May 2011 JigoShop was announced as a free WordPress plugin solution for eCommerce. Despite the fact that was a great plugin, things were moving very slow. Three months later, the guys from WooThemes launched an open-source WordPress plugin called WooCommerce as a fork of JigoShop plugin. It was the start of the WordPress eCommerce boom. Being an open-source project built by a trusty developer who knew what marketing is all about, it was quite fast adopted by the WordPress community. Today the plugin was downloaded for almost 2 million times and the number is growing every day. So does the WordPress themes powered by it.

If MayaShop was launched as a theme with everything built in, version 2 founds it as a WooCommerce powered WordPress theme. This is how things are working now and it seems that this is how they will stay for the future. Enough about history. Let`s talk about themes.

Today`s WordPress themes for shops are presenting some of the most interesting features which you see on big stores: that fancy fashion look, popups for quick product details, unique product pages, ajax shopping carts and seamless and direct payment process.

This is not your ordinary theme. Stag is about the extraordinary.

Both design and simplicity astound in this minimalist-meets-versatile WordPress theme. Powered by the ultra-intuitive Visual Composer, building pages with Stag is easier, and faster, than ever before. Animations and portfolio grids showcase the theme’s modern design, while the clean development allows for accessible customizations and an easy-to-navigate front and backend. 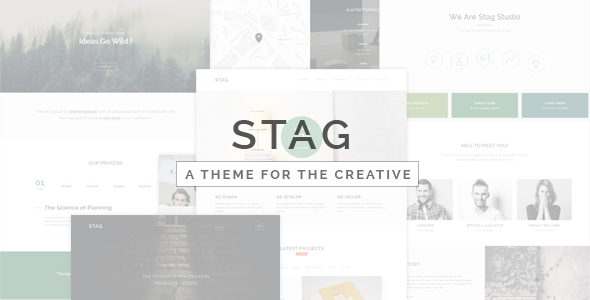 Sympathique is a WordPress theme built for multiple purposes. It can cover both personal and corporate websites but it also features a shop section, which can act as someone`s online store playground. It`s powered by WooCommerce to deliver the shopping functionality. 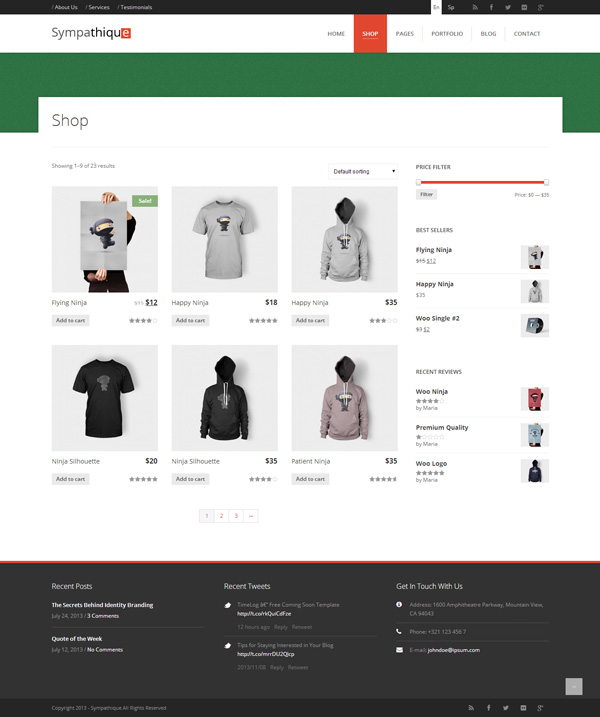 ShopKeeper is a theme developed by the GetBowTied team. They`re recommending the theme as the perfect tool to launch a successful online store. It`s up to you whether the statement is correct or not! This theme comes with super awesome features and a sleek look! 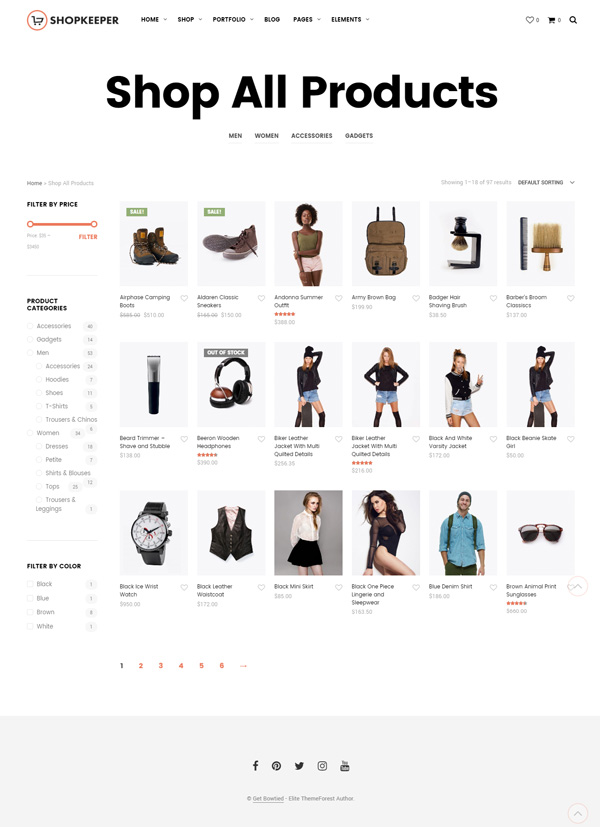 As the name says, The Retailer is a fully eCommerce WordPress theme. It was built on WooCommerce and is one of the most complete solutions when it comes to building an online store. The look and feel makes it a certain choice for a fashion store. 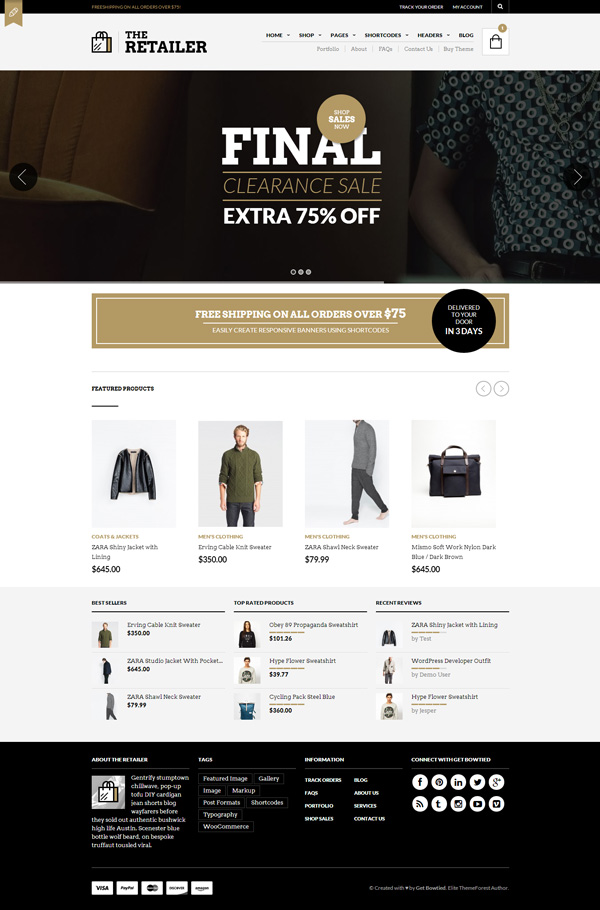 Flatsome was built by a team which call themselves as a WooCommerce-only company that loves eCommerce and WordPress. I have to admit that they`re doing quite an amazing job with this theme. It has everything a shop needs: big dropdown menus, a lot of homepage widgets, impressive slider and a super clean look! 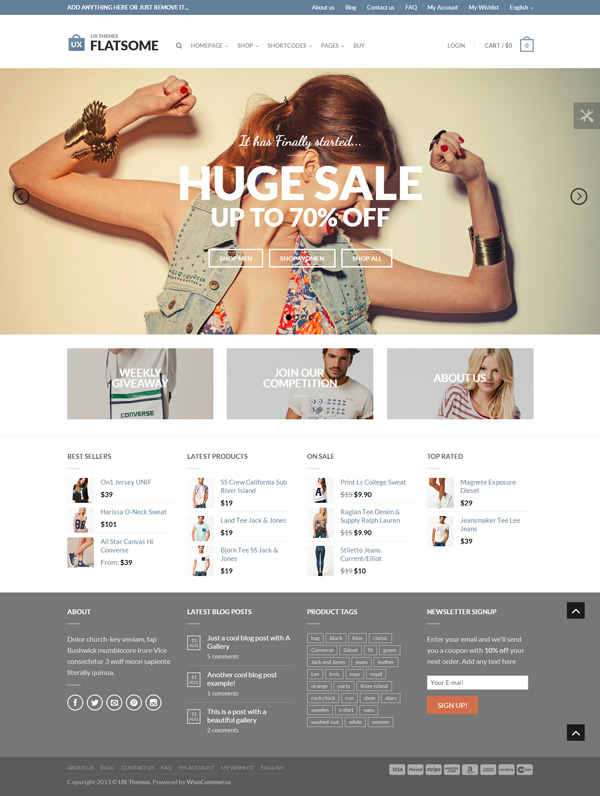 Tyrion is an eCommerce WordPress theme which has the very popular parallax effects implemented into it plus many eCommerce features: product quick-view, popups for marketing and cart shop, custom wishlist and catalog mode. 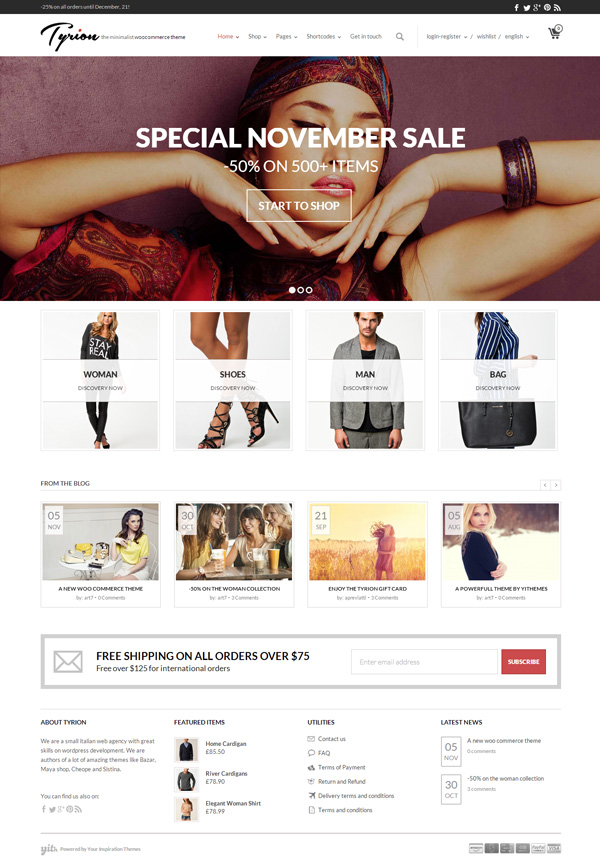 BazarShop is one of the best WordPress themes for eCommerce that I`ve seen so far. Powered by the same WooCommerce plugin, the team took it to the next level, implementing all sort of useful things for running a website like megamenus, popups for marketing campaigns, wishlists, etc. The team behind the theme is well known on this eCommerce niche and I consider them one of the eCommerce WordPress Themes pioneers. 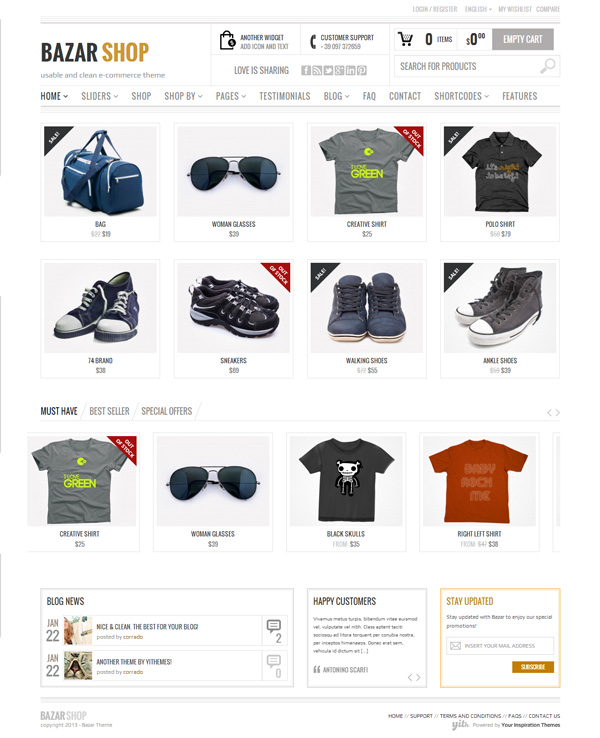 This is what I call a classy shop solution. When it comes to features is not one of the most gifted themes out there, but the theme was built to buy with the eyes. I was impressed by the fancy typography and the fashion look that it has and it`s certainly a great solution for jewelry and luxury product shops. 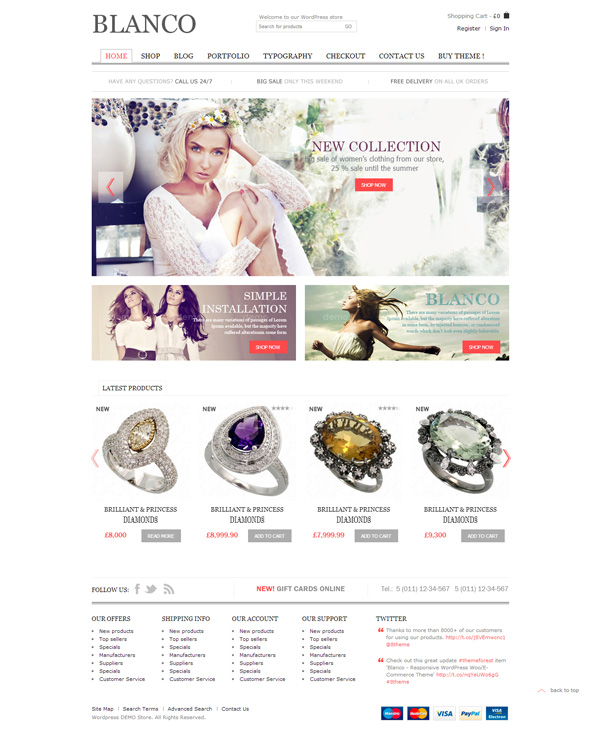 Neighborhood is another cool WordPress theme powered by WooCommerce which has a feature that I didn`t see somewhere else: a Personal Shopper. An example: it can look in the shop database for any product, with a price range between the one that you provide. You`re able to set even the color and the brand. This is nice, isn`t it?

This theme is packed with tons of features, so watch out because even if this is great for a theme, it might confuse you while setting up the shop and I`m sure that you don`t need all of them! 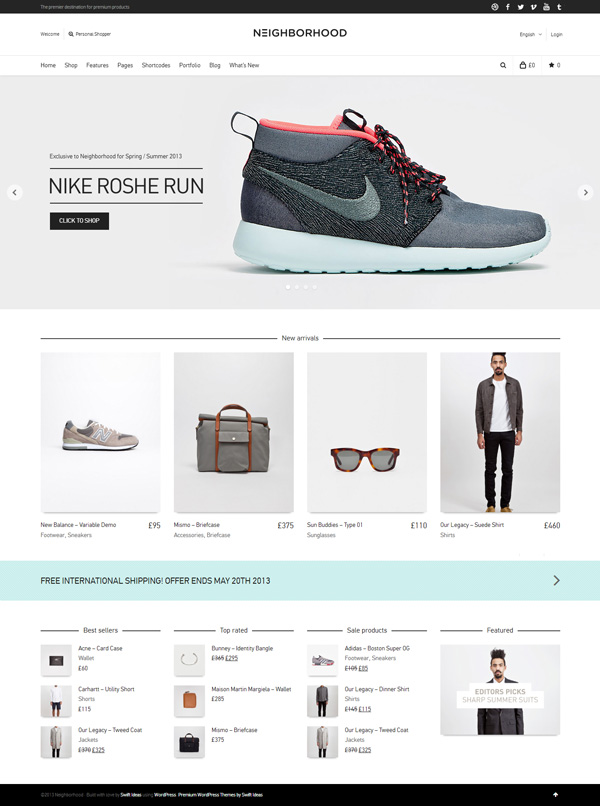 As the name says, uShop cares about u. The team who developed the theme is known for its attention to details and user experience. So, if this theme is good at something, that is at making you feel comfortable while setting it up and adding your products. Among features, I want to mention the “Lookbook”, a gallery for displaying collections the right way! 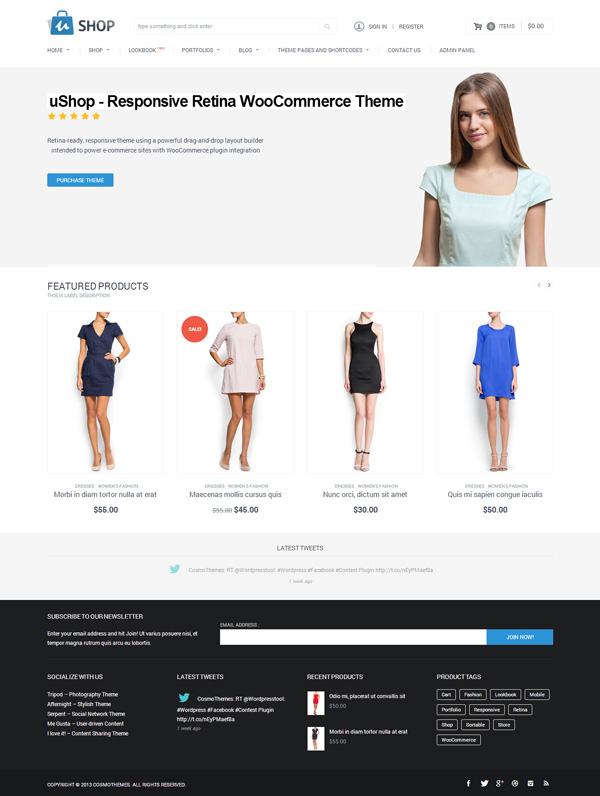 TechGoStore is an eCommerce WordPress theme which covers the playful side of any men. The demo states clearly that the theme is only for men`s needs: gaming, sports, music, shoes, electronics, etc. It`s built on WooCommerce, so the functionality is one of the best. 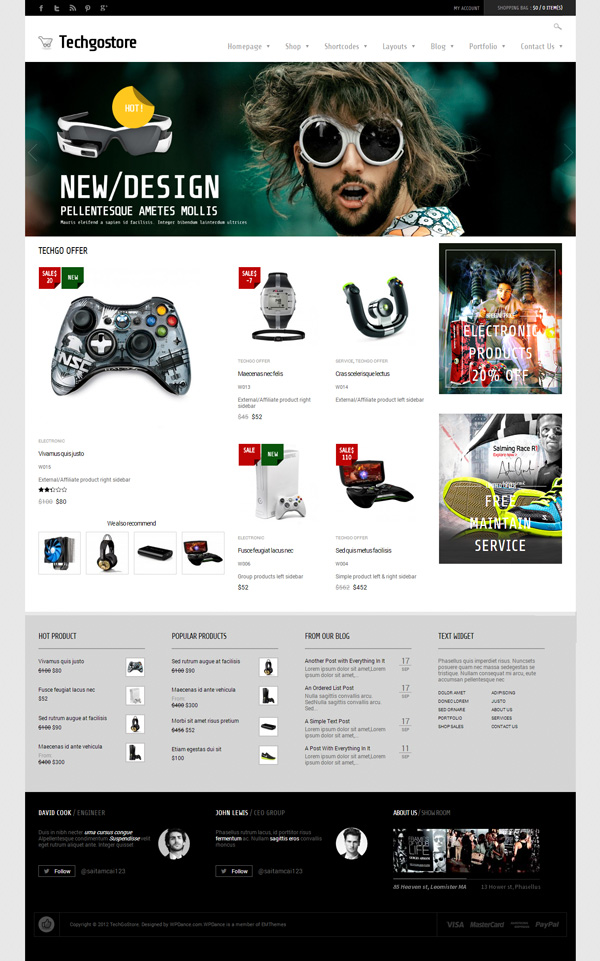 Even if the name is not so interesting, this is one of the best CMS themes. It`s main purpose is not eCommerce. It is theme which has a corporate feel but thanks to the almighty WooCommerce plugin, it has a shop section which looks impressive.

I decided to showcase it because it`s flawless from back-end to front-end and you have to believe me because it was the base of some projects that I`ve been worked on. 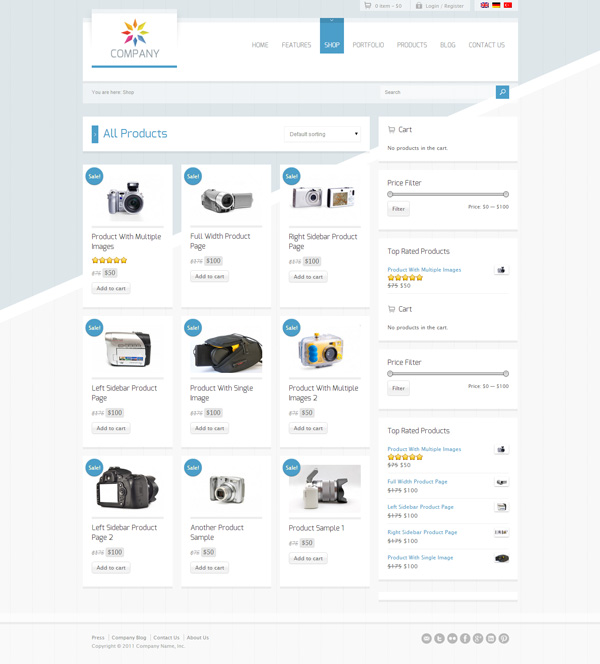 Last but not least from our list is Room 09, a WordPress theme developed by YourInspirationThemes, the guys behind many other eCommerce WordPress themes. Among features, the theme is responsive, has many premium addons included and a feature called “Product Inquiry Form” so your users know that you care about their tastes. 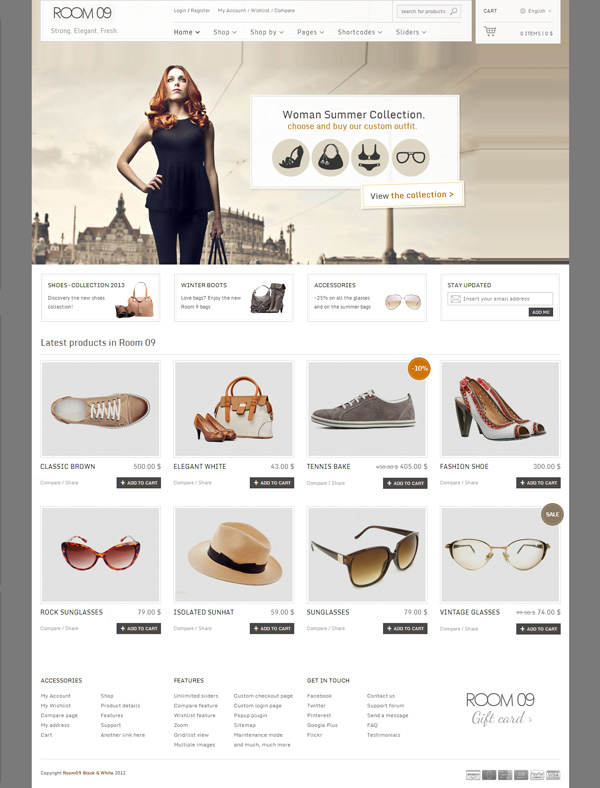 eCommerce WordPress themes are a great solution when it comes to building an online store and I`m sure that is the first choice for people who know how WordPress works. I`m looking forward to see what developers are working on for the future and I`m almost sure that we might be surprised about how high the bar can get raised!