There has been a lot of debate as to whether Gutenberg, a WordPress owned page editor, will match and eventually kill premium page builders. Gutenberg, as you probably know, is designed to take over as the new WordPress default editor. It was recently launched as a plugin in a beta testing phase and is compatible with WordPress version 4.8 or higher. In its current form, it is still up to par with current premium page builders which are in the market. This is primarily due to its limited options and feature set.

So how do we expect this “battle” to proceed?

Although Gutenberg is expected to be a fully developed and included as the main editor in WordPress 5.0, it still might not be able to dethrone the major in the market because of the following reasons:

For starters, Gutenberg does not have drag and drop or column features (at least as of the time of writing of this article) – but I strongly believe they will be part of the editor and actually, these features are experimental, so people are already working on them.

In premium builders, where designing a semi-complex page, these are the most basic features that users would look for before even considering to use them. Even some of the lowest rated ones would beat Gutenberg as long as they have drag and drop plus column features. With this in mind, it’s actually hard to make a direct comparison of the two cannot even be made. There is a very slim possibility of Gutenberg beating builders like WP Bakery Page Builder, Divi, Beaver Builder and the other major plugins.

Most of them have extensive responsive design settings. These are extremely important for designing websites for all devices and web designers are typically very adamant about being in control of what’s visible on which devices – and how they are displayed, how elements flow depending on the device being used to access the site.

More and more people are using mobile devices to access websites and this increasing segment of users require websites tailored to fit on their small screens. Even Google is about to start using mobile as the way to index a website, so website owners and designers need to be in full control of what is shown and how on different devices.

The current plugin is quite basic and lacks extensive responsive design options. Once again, this makes it quite inferior to page builders and also a less preferred alternative for those who are serious about design.

3. It has significantly fewer features 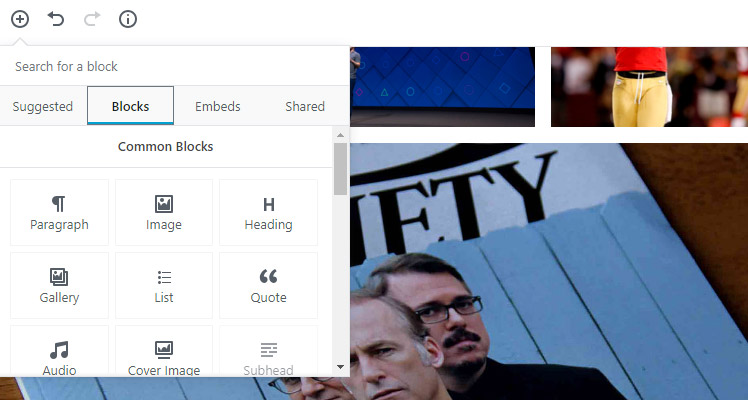 It looks like a slightly modified version of the current WordPress editor. It has a plain user interface, which is less visually appealing than some of the premium builders (for example Divi Builder, Beaver Builder and Elementor are known for their excellent user interfaces). It also lacks other features and additions such as multiple template layouts to kick-start your web design process.

That said, is not all bad and flawed. It is especially good for building blocks and block editing, it even lets you use shortcodes. But that does not cut it as far as simplifying web and design is concerned. Not mentioning that right now it lacks integrations with their own tools like WooCommerce. People still have to rely on plugins for product sliders and carousels, though.

Apart from features, they also have the edge in terms of the massive following and online communities that they have built. Have been around for a number of years, quite a lot of existing web designers and developers have become raving fans of one premium builder or other.

Beaver builder, for instance, has an online community of close to 12000 members.

Elementor has a big following, with a user group consisting of more than 16000 members.

These groups help the products by maintaining a close-knit society of developers and designers. The users are enabled and support and they can engage in their respective builder conversations. Furthermore, these strong communities are also present in other social media such as YouTube where they share video tutorials as well as other videos to keep them informed and entertained.

This form of interaction provides a very personalized level of support which is like no other. It keeps the developers up to date with the most recent developments from the builder vendors and provides help, both from the page builder as well as the community members, when one of them gets stuck while doing some development.

This means that they get to develop faster and, as a result, keep using the builder and refer others to use it. Getting used to a product in such a manner maintains consistent use, with a very low possibility of shifting to another builder/editor.

So far, Gutenberg lacks this kind of support – on the contrary, it has already suffered a serious backlash in its popularity because of the decision to embed this as the default plugin as of WordPress 5.0

Strong Enough to Take On Gutenberg

The current premium/freemium page builders are also not taking the assault on their business lying down. It has the advantage of being a WordPress product and will be integrated for free in WordPress 5.0. Knowing this, they are actively developing new features in order to compete with the free editor.

Smaller builders are likely to receive most of the assault because they will have to compete for the casual users as well as with the big builders for developer usage in web building. Most likely, they have little resources and a small capacity to rapidly improve their builders and market them efficiently in order to have a piece of the pie before it hits the market in full force. That is why builders such as Tailor Page exited the market before the situation became worse for them. Wisely they have decided to invest in other options which would be more profitable to them.

As much as they seem to be in competition, a smart move would be for the two to join forces in order to give the developers and designers a better, richer and more flexible developing experience. It would be a win-win situation for all.

For instance, the creators of Elementor decided to look into ways of extending it into Elementor while the Beaver Builder team is looking into solving compatibility issues between the two in order to build a fully integrated builder to effectively serve its developers.

This partnering has the potential to bring about builders that can have their different modules used as separate blocks in content designed by Gutenberg. This would be a really powerful feature and would go a long way in increasing the popularity of both.

It could also bring about a feature that would enable whole row designs in page builders to be placed in a Gutenberg block. An example of this is placing a row containing a form into a block which can be easily placed anywhere within the content while being directly updated from the page builder.

Will Gutenberg Deal a Death Blow to Page Builders?

It has a long way to go before becoming a worthy competitor to the more established builders. To add insult to injury, the plugin received a lot of negative reviews from the time it was launched.

However, still being in its infancy, it has a lot of potential. It is only in its first (of three) development stage with templates and full site customization expected in the future. They might find themselves in a hard spot in the future, with only their die-hard supporters and online communities to hold on to. The full force of being the default editor and with a lot of development resources available is sure to deal a blow to this niche.

Their best solution so as to avoid a death blow in the near future would be to forge partnerships with Gutenberg, building on integration between the two, and improving on their builders’ features while actively engaging their developer communities and informing them of new features and developments. This would be a good idea because the decision between the two would then be down to personal preference.

If it gets to a point where it is as strong as some of the current builders, AND be available for free, then it’s going to be very hard to compete.

On the other hand, much of the success of WordPress is owed to the 3rd party plugins which take the CMS to the next level.

A partnership built on mutual benefit is a scenario which would be best for all, and we’re hoping on this being the path chosen by all the major stakeholders in the industry.